Our latest design, and even if we say it ourselves the one of which we are most proud. KIM is a small loudspeaker and takes up far less room space than previous models, but KIM delivers music, emotion and scale in a way that’s surprising for its size.

“Finks KIM is an incredibly well-balanced, perfectly supple loudspeaker that plays coherently and coherently from front to back. Certainly, one of the best there is in this class.” 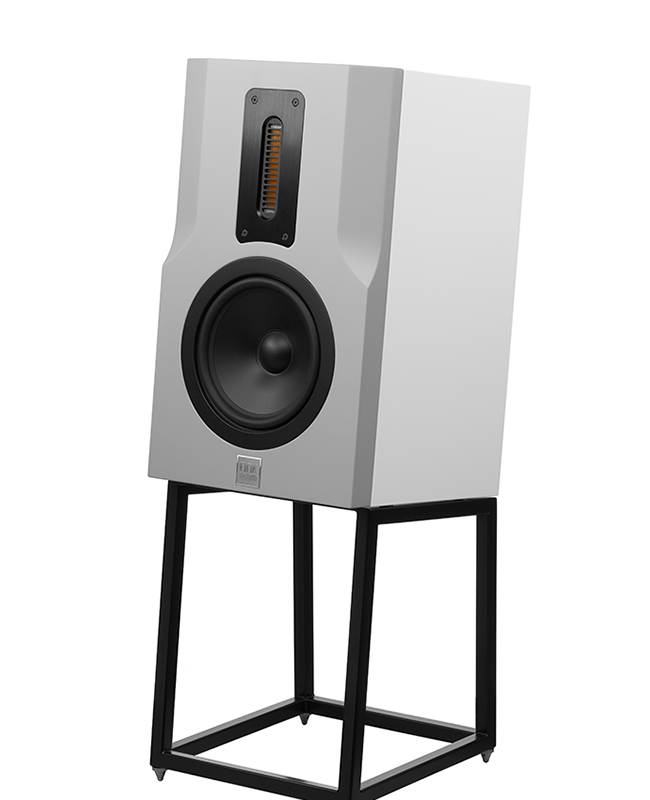 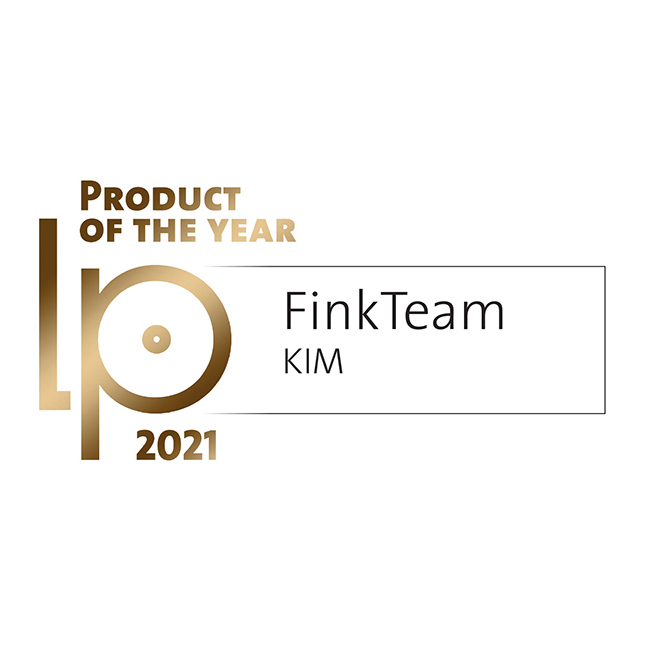 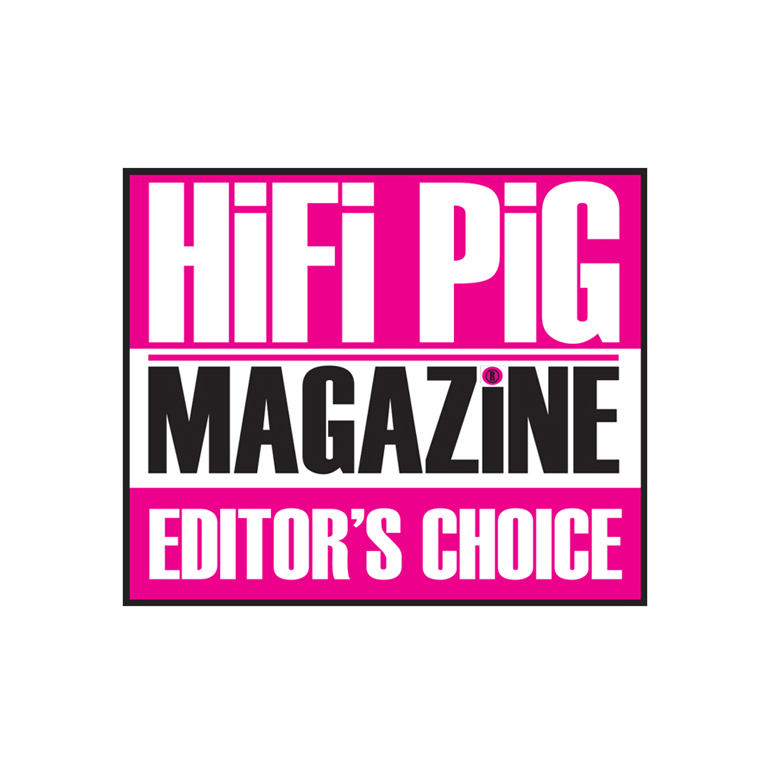 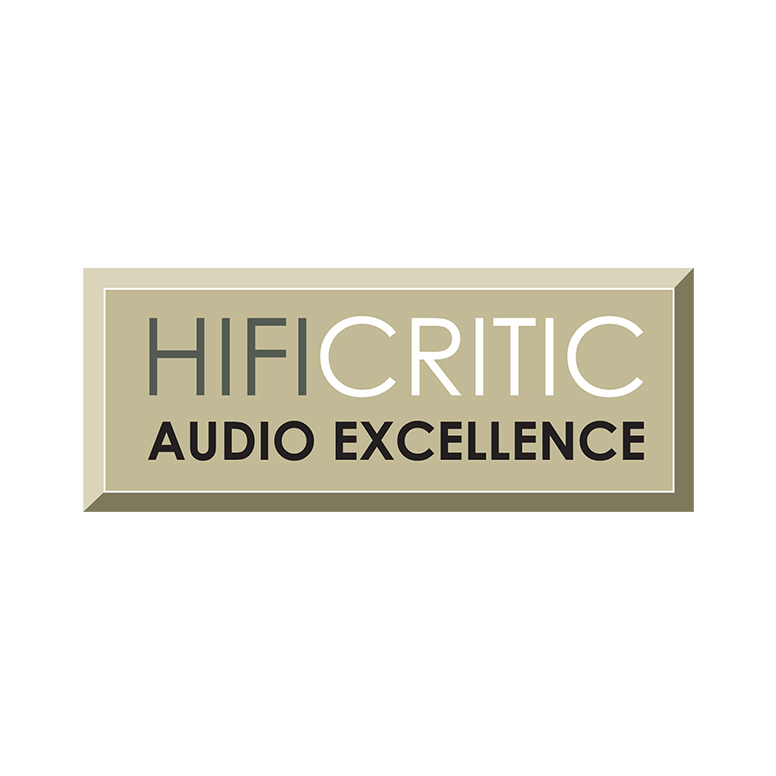 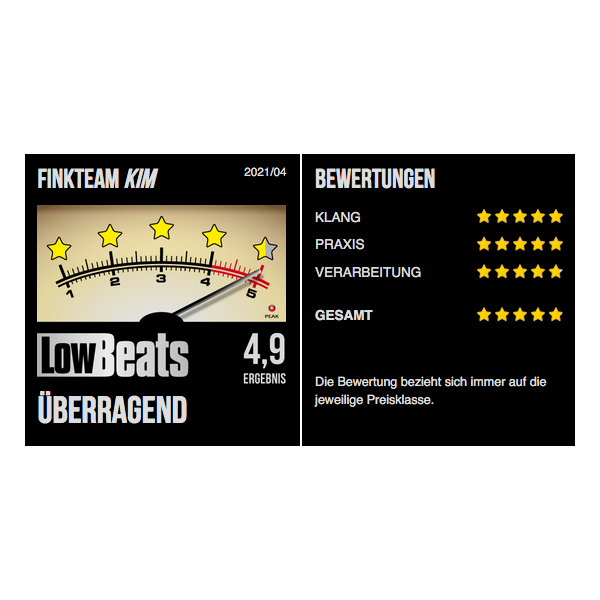 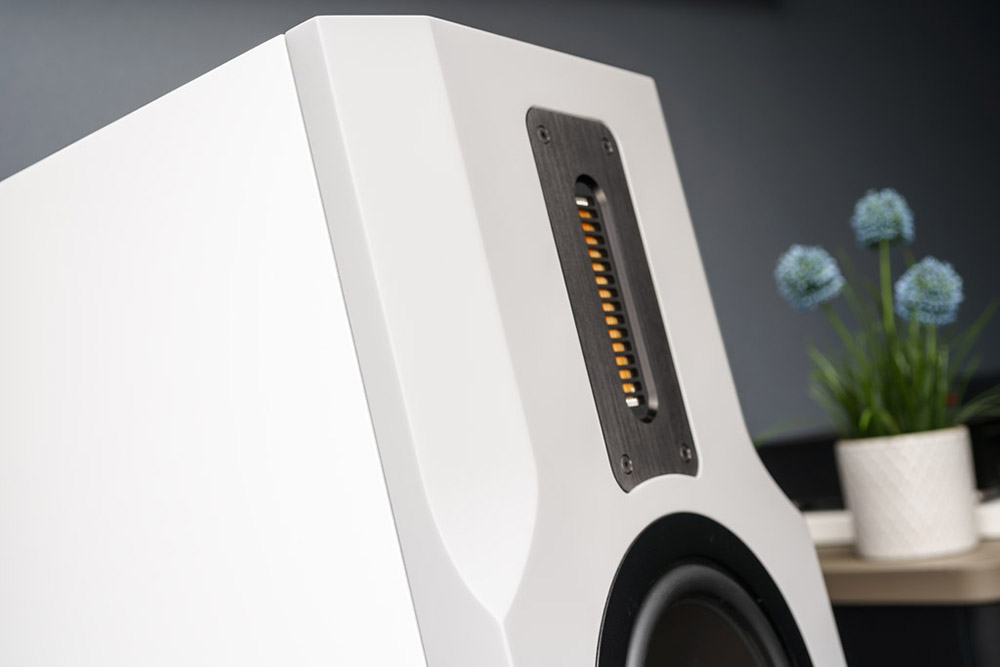 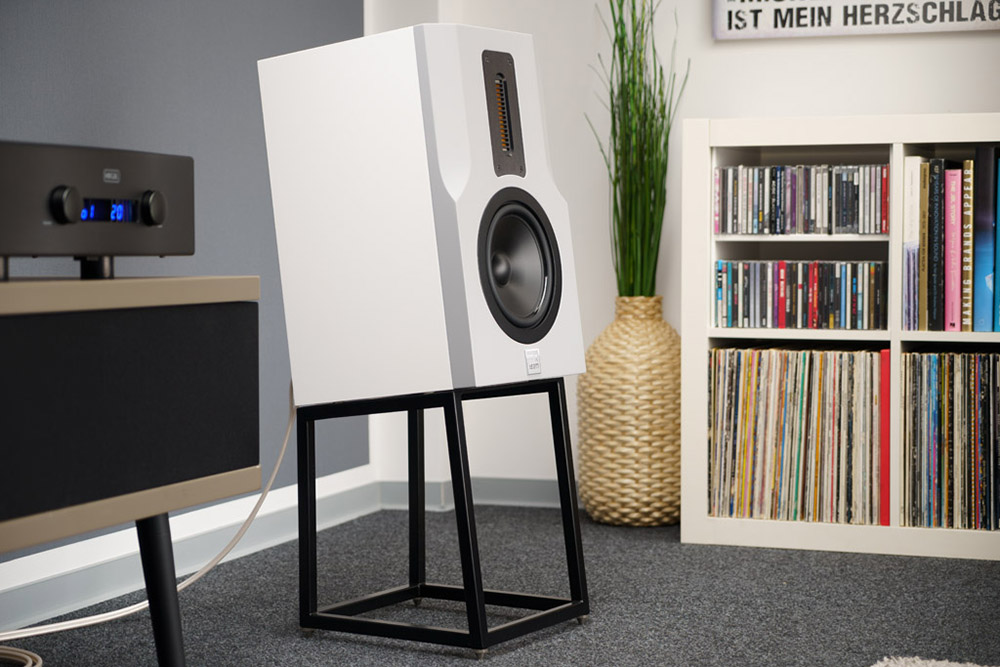 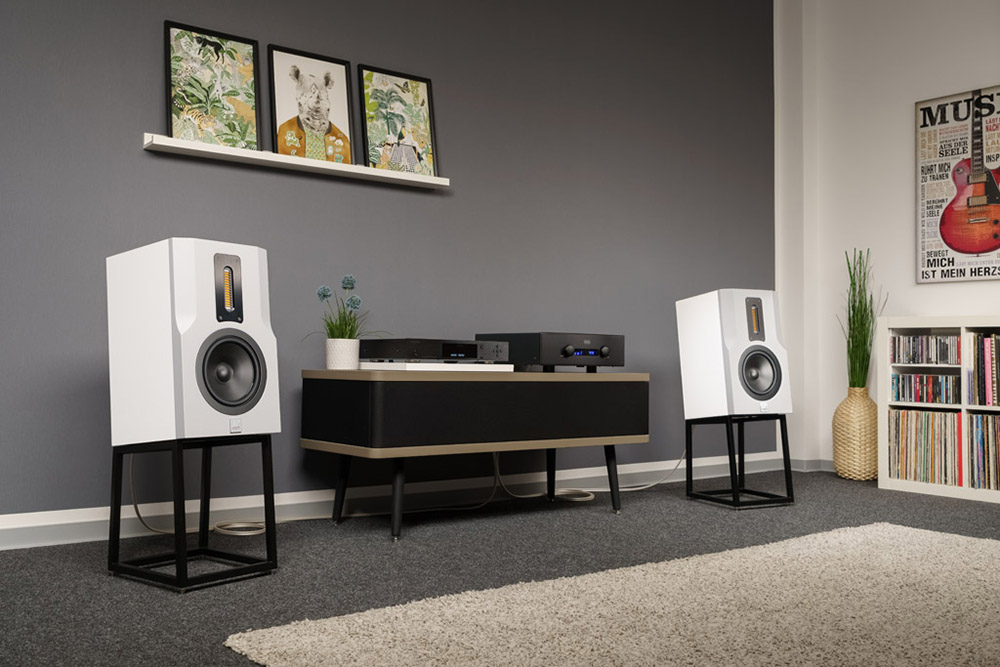 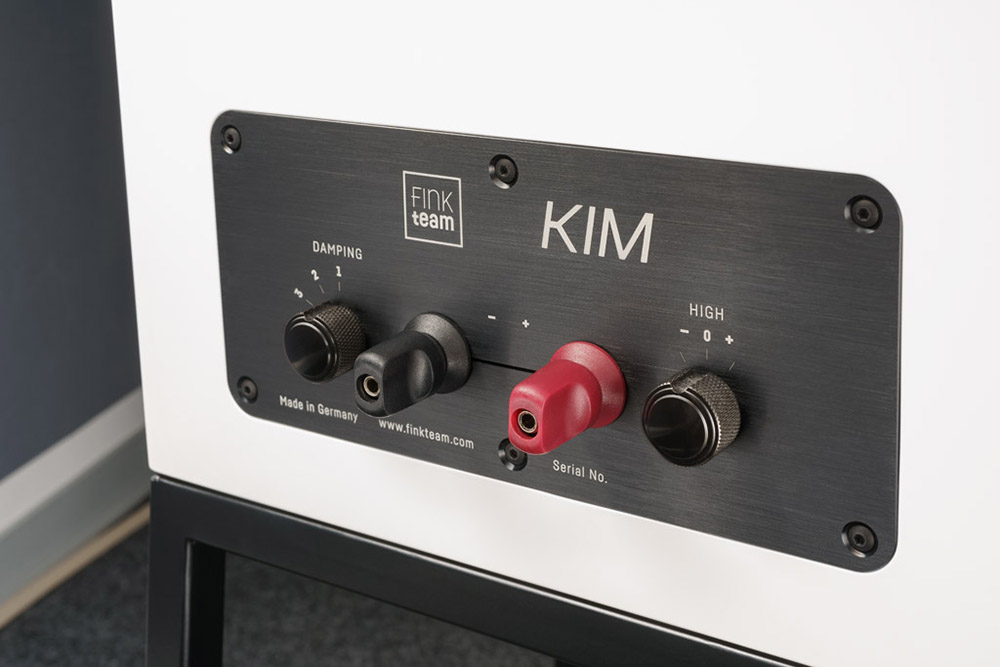 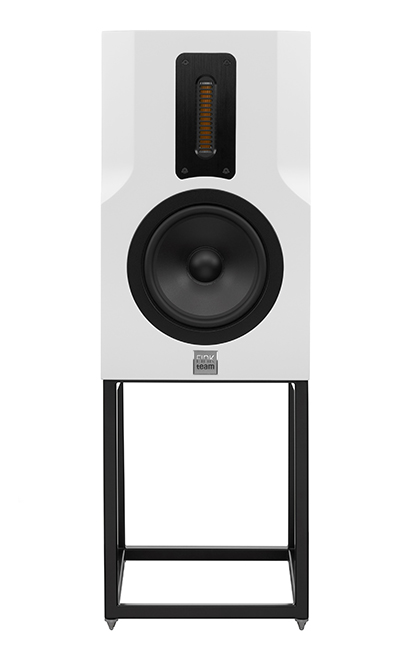 Defining a new model for a relatively new company in the marketplace is always challenging. With Borg, we made our second model a success by combining innovation and more of the same.

For our third model, KIM, we asked our dealers and distributors, and they asked for either a more expensive model or a lower-priced model, but there was no clear trend.

So, we did what we are good at – we made it our way again – a mixture of innovation and more of the same. KIM had to be a speaker that we would use ourselves, something fun. We designed another speaker for us.

Borg is and always was a statement speaker. Bold and visible, never trying to hide and with as little compromise as possible. So how could a new model be different? Importantly, could it include Borg innovations? How could we reach a retail price which makes the speaker available for more people without losing quality?

A few basic design principles stayed the same. A reflex system with a paper coned woofer with a massive magnet, Two-way construction with AMT HF unit, again based on a Mundorf core. A cabinet with everything needed to avoid unwanted radiation from the box and a highly optimised crossover with high-quality parts.

We wanted an enclosure large enough to deliver realistic low frequencies and scale but was small enough to be relatively discreet. It had to be low enough to sit below windows and work well close to walls.

KIM is available in a selection of finishes/colours. The rear of the cabinets are real wood veneer, except the white black colours. KIM fronts are a soft paint finish. 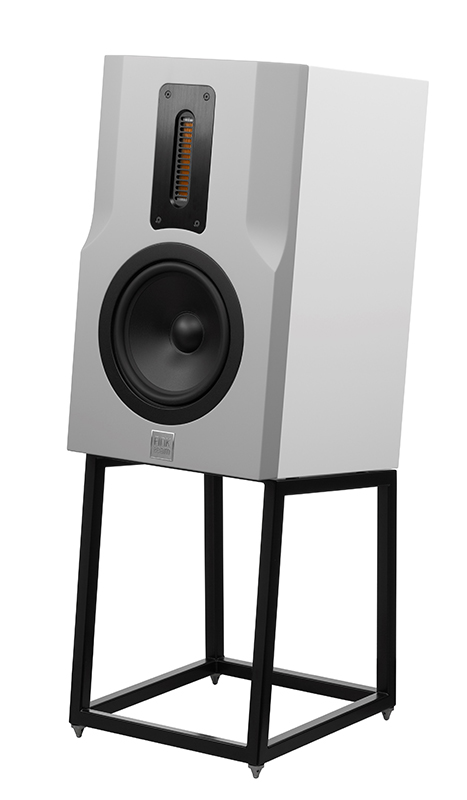 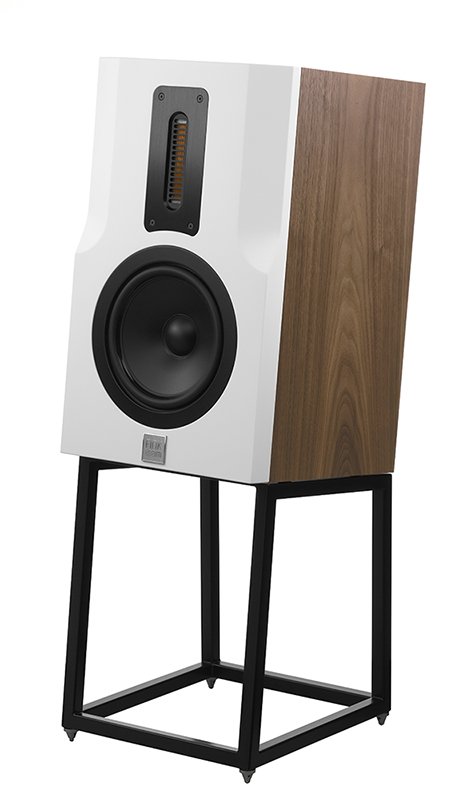 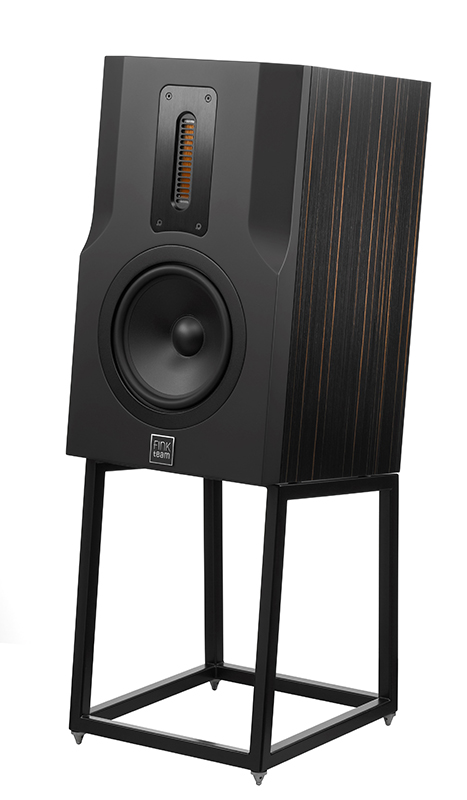 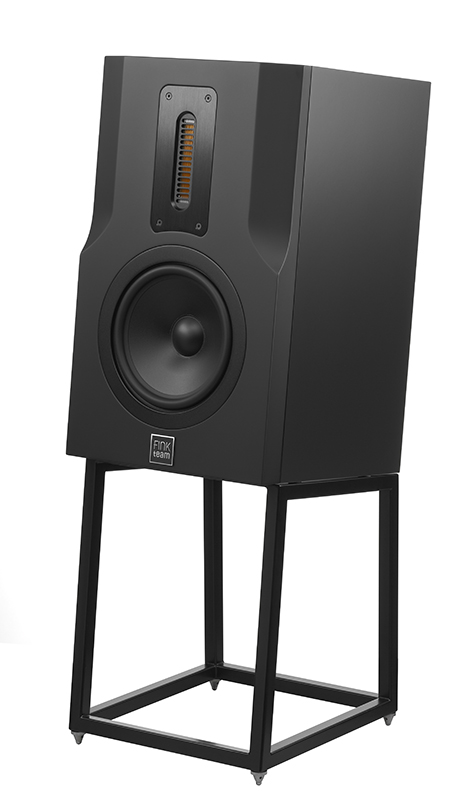 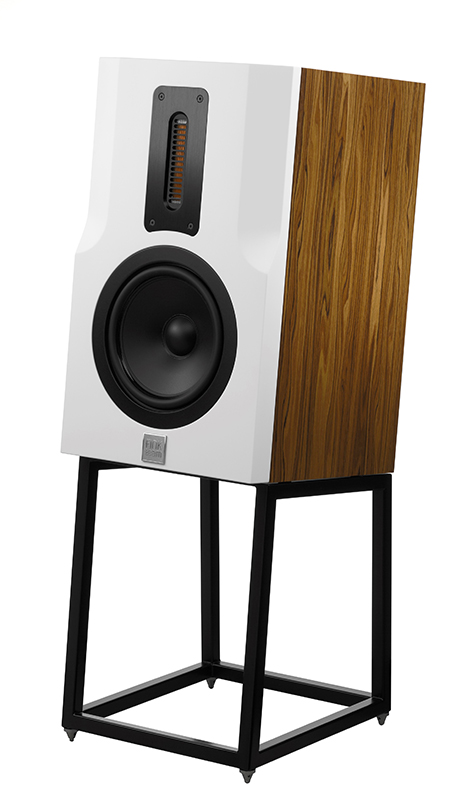 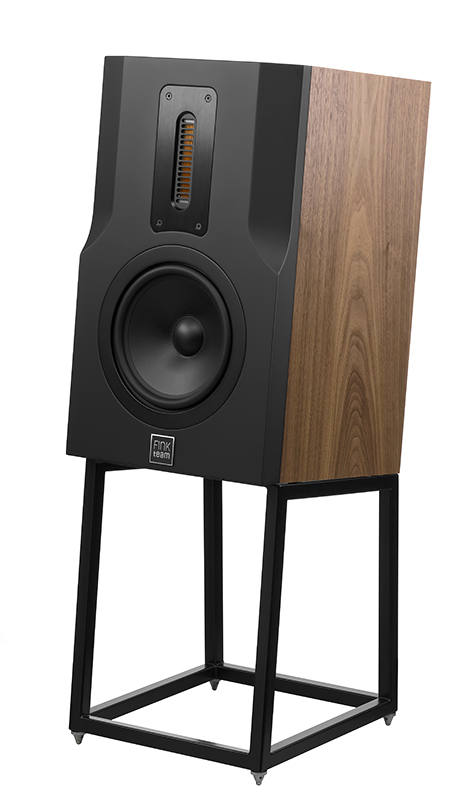 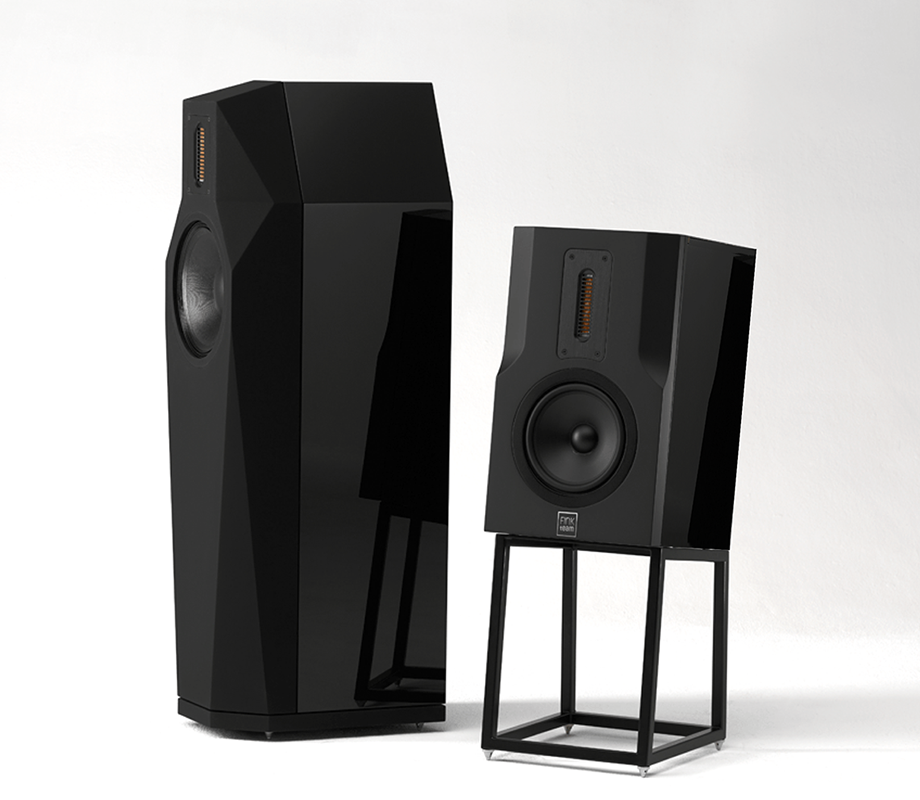 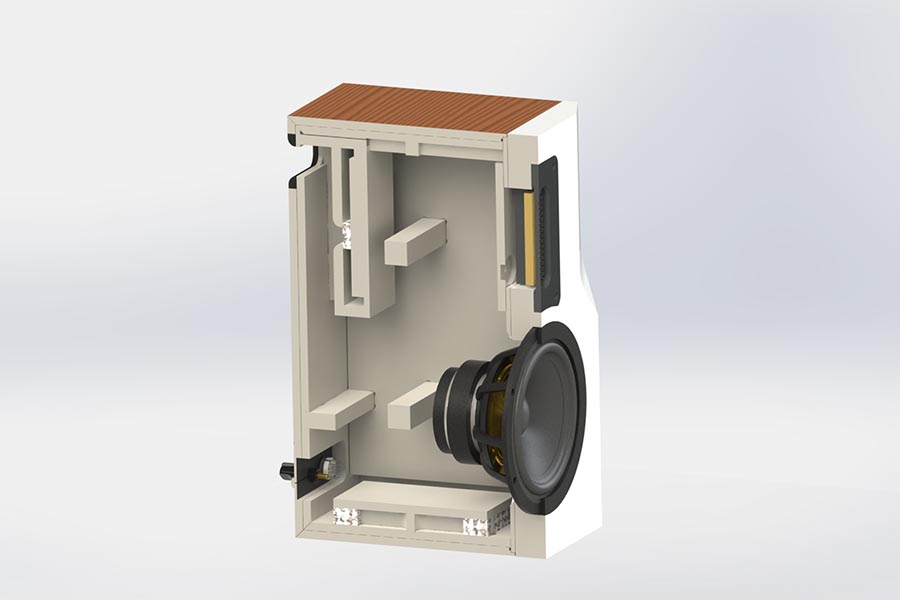 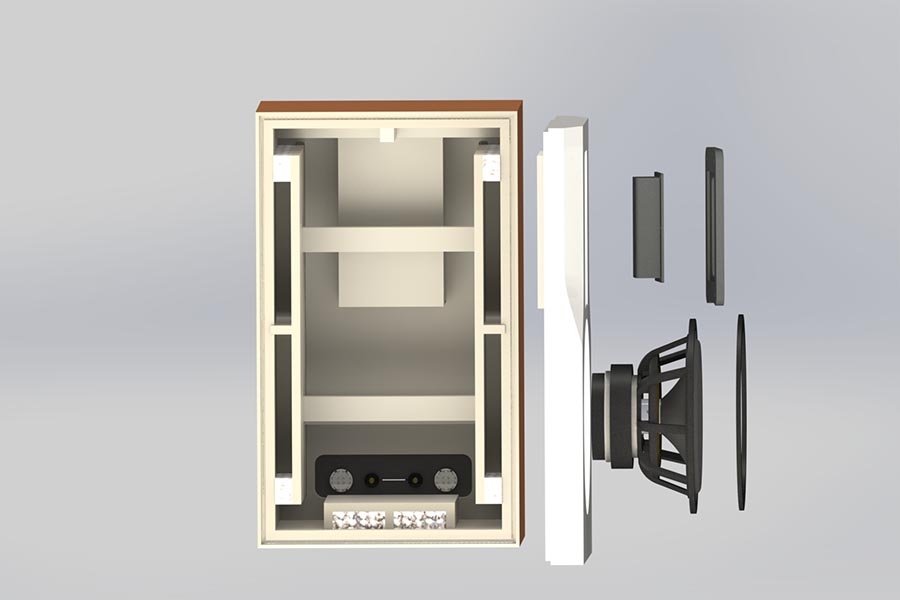 FinkTeam cabinets or enclosures are always works of art inside and out. The construction centres around two critical tasks: to hold the drive units still in space and to radiate as little energy as possible.

We have talked before about the signal to noise ratio of a loudspeaker cabinet, and it is still one of those fundamentals in our thinking. It’s pointless to design and manufacture state of the art drive units and engineer crossovers with perfect knits if the cabinet is singing along with the tune.

We think of loudspeaker system design as something where the integration of the parts is a positive-sum game.

The sculptured front baffle of KIM reducing in width from 300mm to 205mm around the AMT is to aid high-frequency directivity and minimise diffraction. Multi-layers of MDF panels glued together with a new unique damping adhesive form the front baffle, which is then precision CNC routed. The sides and rear of the enclosure utilise a similar technique, but the panels are only a single sandwich.

Bracing is one-dimensional to avoid the unnecessary spread of panel resonances common in modern loudspeaker designs. Designing for the lowest radiated energy is almost impossible without the benefits of laser interferometry and FEA.

Strunk absorbers are used inside the enclosure to remove standing waves. These Helmholtz resonators in anti-phase to the standing waves cancelling them without the deleterious use of masses of absorbent material.

For years the argument has raged among loudspeaker designers between those that ‘stuff’ their boxes full of polyester fibre or sheep’s wool or other ‘magic’ absorbent and those who prefer a relatively empty box. Like all design elements, there are arguments favouring both, but to simplify it here * masses of stuff tends to ‘slow’ the speaker’s sound but possibly give it a more hi-fi sounding but less fun or involving performance.

*There will be more explanation in the KIM White paper 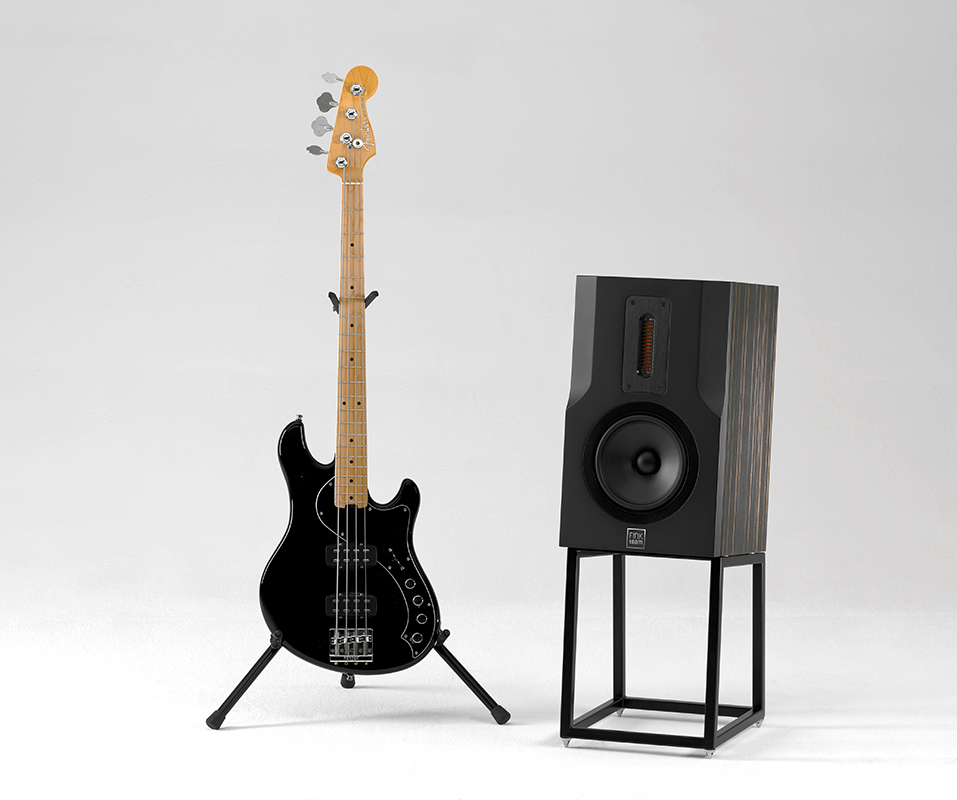 The KIM stand is an integral part of the design. The stand is deliberately light to have low stored energy and is open to have a low surface area to have the lowest acoustic effect.

This angle gives KIM an optimum listening distance of 3-4m. 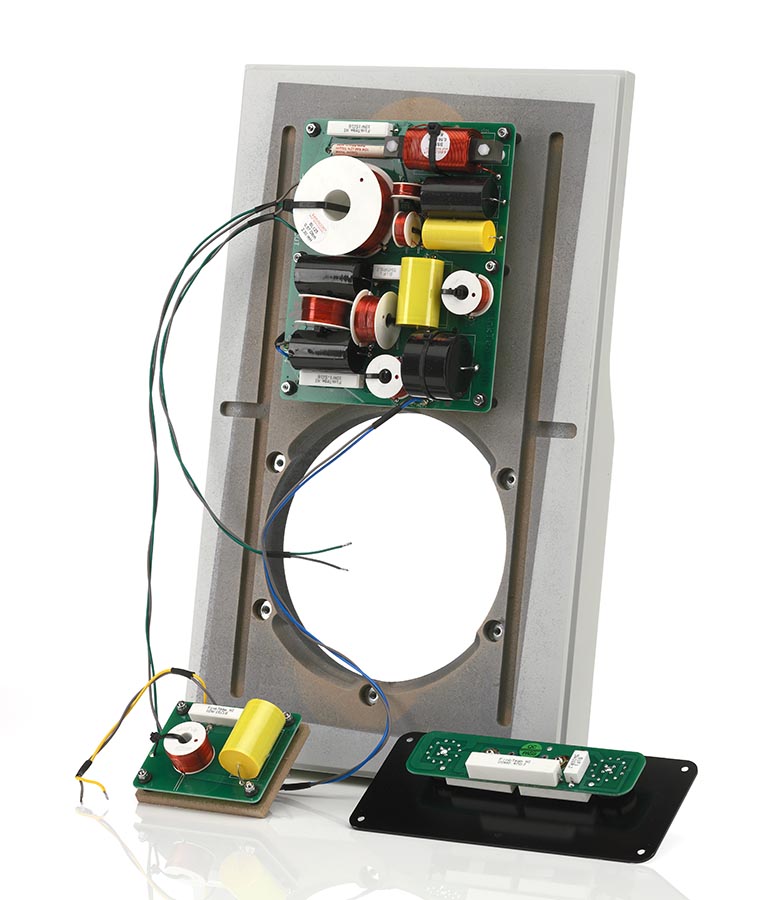 Knitting together an eight-inch mid-bass unit with an AMT HF unit is more straightforward than a 10.25-inch mid-bass, but a seamless transition is not easy.

The basic crossover topology is 4th order acoustic Linkwitz-Riley but with an all-pass delay for the HF unit and some simple impedance compensation at the low end to make KIM easier to drive.

All the inductors in the crossover are zero distortion air-core designs with polypropylene film capacitors also chosen from Mundorf. Resistors are a combination of Mundorf low inductance and Bifilar types.

The result is a loudspeaker system with an average impedance of eight ohms, a minimum impedance of 5.9 Ohms and 86db sensitivity for 1 watt. Note here that 1 watt at this impedance represents a lower current draw than with most loudspeakers.

The trend since the 80s has been for slim loudspeakers, which has necessitated the use of smaller mid/bass drive units. The classic two-way loudspeaker went from being an eight-inch with a 19mm tweeter to a six and a half to a five or even four-inch mid/bass, and at the same time, tweeters generally moved to 25 or 29mm.

With KIM, we wanted to design a speaker we would use ourselves, forcing us in the direction of an 8inch mid-bass driver.

Similarly, as we said with the 10.25inch driver unit of Borg, a great 8inch will not beat a great 10.25 incher, but it can deliver a full range performance with only a small compromise on maximum SPL.

Unlike our previous bass and mid-bass drivers, we needed a sizeable half-roll surround to allow the excursion due to the smaller pulp paper cone. The softer rubber half-roll surround also terminates the cone correctly to eliminate colouration caused by energy returned to the cone from the cone surround.

From our learnings from Borg development, the mid/bass has an oversized magnet. This ensures a Q that is too low and which alone would reduce the low-frequency performance. Combined with the higher than convention resistance of the primary inductor feeding the driver, the Q is corrected, enabling the system to deliver clean, accurate in-room bass to 32Hz—a clever solution to using an air-core inductor for the lowest distortion. 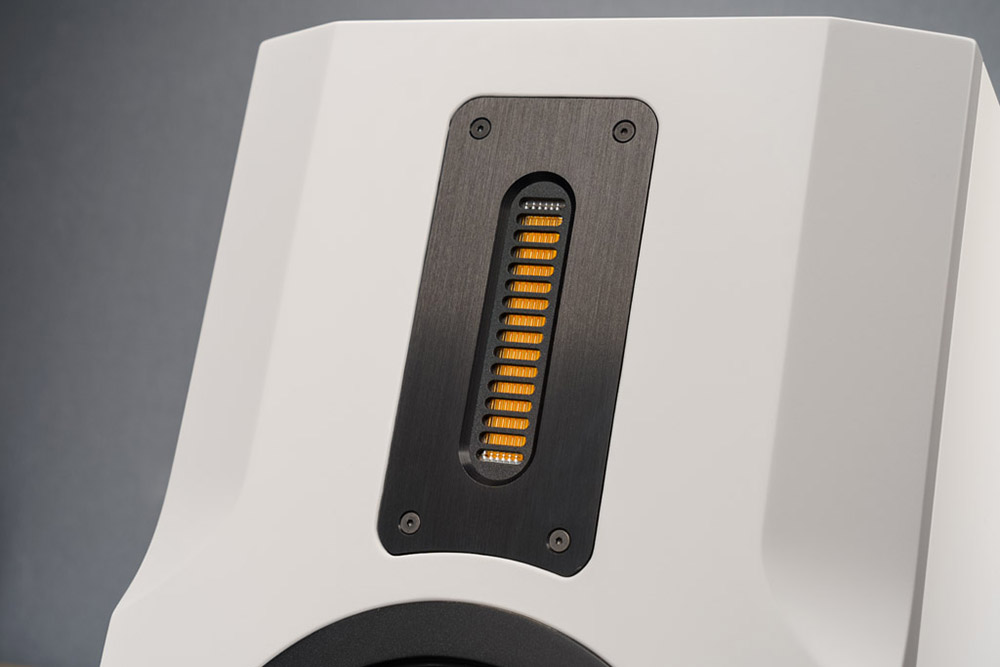 The tweeter is an Air Motion Transformer (AMT) operating according to the principles established by its inventor Oskar Heil. Developed by Mundorf together with FinkTeam and manufactured specifically for FinkTeam by Mundorf, the AMT has a strong, 25μm-thick pleated Kapton diaphragm with 50μm aluminium strips. This material has excellent internal damping, resulting in particularly low distortion. We developed a unique etching process to produce it, and the diaphragm configuration optimised through many tests.

The choice of 110mm AMT delivers a wide dispersion horizontally – giving good stereo across a wide listening area. The directivity vertically is deliberately controlled to reduce floor and ceiling reflections that may harm the imaging and reduce the apparent image height. 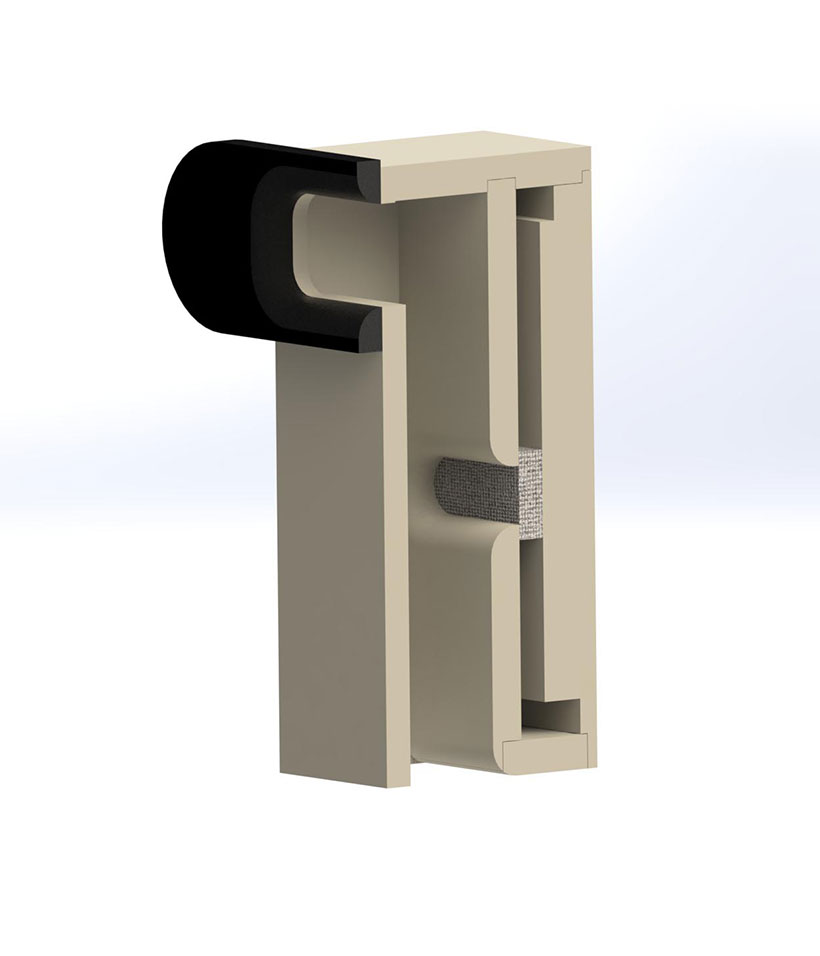 Reflex ports or vented enclosures have many amateur loudspeaker design experts confused. Over the years, they have heard many loudspeakers with poorly designed ports. Poor system design produces slow lumpy, and ill-timed bass, and many have decided this is relevant to all ported loudspeakers.  It is not.

Porting a loudspeaker correctly gives significantly more low-frequency power handling, more bass in the important octaves, and with two-way loudspeakers can bring an added realism to the midrange.

The slot port integrated into KIM’s rear panel is tuned to 37Hz. An additional resonator in anti-phase called CleanPort removed the pipe resonance of the main port.

There are two additional controls: an HF control which allows a subtle change in the overall HF level to suit different rooms.